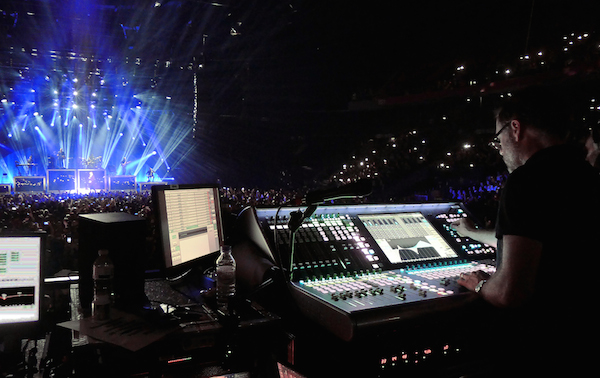 British pop/soul phenomenon Sam Smith is now back out on tour after his much publicised break for medical reasons. His summer itinerary is a festival hopscotch between large arenas and smaller music halls in Europe and the U.S., culminating it all at Brazil’s Rock in Rio in September. Looking for a console that would best withstand the intensity of the tour while also supporting the singer’s unique sound, Sam’s FOH engineer Simon Thomas selected an SSL Live. L500 console supplied by Clair Global.

An industry veteran who has worked with the likes of B.B. King, Moby and Kylie Minogue, Thomas had his pick of consoles to mix Sam’s world tour. He ultimately chose SSL Live for its sound quality. “Unlike other consoles, the SSL offers more delineation between instruments,” says Thomas. “This is especially obvious with drums; most digital consoles feel like they’ve got a crossover with a gentle slope that makes it sound like all the drums are rolling into one another. The SSL, on the other hand, feels like a crossover with a very defined slope, so the difference between a snare drum and a kick drum and a tom is well-defined, even with regards to the low-mid crack of a snare, which is usually unattainable with digital desks. Though it’s common in the analogue world, where you would just drive the pre-amp, you can actually get that same classic sound on the SSL. I get a similar response on Sam’s vocals. His incredibly dynamic voice can be a challenge on digital boards and it’s still the early phases of running it through the SSL preamps, but so far I’ve been really impressed.”

Thomas uses Fader Tile 2 on the lower left for stage inputs and keeps effects and playback on Tile 3. “I’ll have one layer for drums, the next layer will be back line stuff, and another layer will be vocals,” he explains. Thomas and his team carry full production for the majority of the tour, but are planning to pick up the board in some of the regional territories. “Basically, wherever we go, SSL goes out of its way to make sure we’ve got a desk.”